Sachin Kaeley (2013), acrylic and spray-paint on board 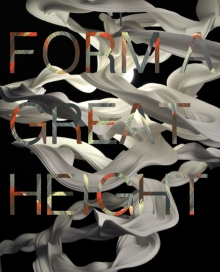 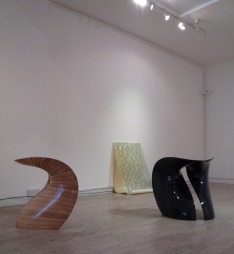 Please contact the gallery for information about prices and available works.

“I put my left hand in front of the receiver; I turned on the projector and my hand appeared, just my hand, making the lazy movements it had made when I photographed it. Now it is like any other object in the museum. I am keeping the projector on so that the hand will not disappear. The sight is not unpleasant, but rather unusual. In a story, that hand would be a terrible threat for the protagonist. In reality – what harm can it do?”

4 Windmill Street presents Form A Great Height, a selection of active surfaces across painting, sculpture and product design. In a fluctuating moment for the virtual surface, technology that was once only accessible to industry professionals to lift/capture/steal the 3D skin of any shape and recreate it has become public property. Such projection anticipates the ability to capture physical objects through digital means traditionally limited to two-dimensional reproduction. Images can now become models; the camera can manufacture a third dimension, allowing us to own a real physical reproduction of anything merely by photographing and printing it. This has opened up the possibility for unforeseen uses and implementation; creative prospects of surface use.

This is now a generation of surface tension between function, beauty and texture – of original artefact and artifice. Geoffrey Mann’s Nocturne [2005] is both designed object and ethereal mapping; based on the charted pathways of a moth around a light bulb, showing time and motion as a three-dimensional representation. There is fluency and manipulation present but also an accurate reading of time-lapse movement. Assa Ashuach’s Venturi stool similarly reads its form from the resting surface of the sitter; a second skin with enough structure to support their posture from an imprint.

To include painted and sculpted surfaces in this discussion broadens the sophisticated nature of the unique object. Works from David Buckley, Harry Scoging Beer, Majed Aslam, Robert Phillips and Sachin Kaeley will be scanned and projected in real-time by Edward Bagenal’s Reformation [2013], capturing the gallery installation as an animated, rotating collection of pixels. This designed interaction with occurrences happening inside the space brings the discussion of surface to life, as the audience becomes part of the mapping throughout the duration of the show.